Salespeople Must Accelerate Response or Fail 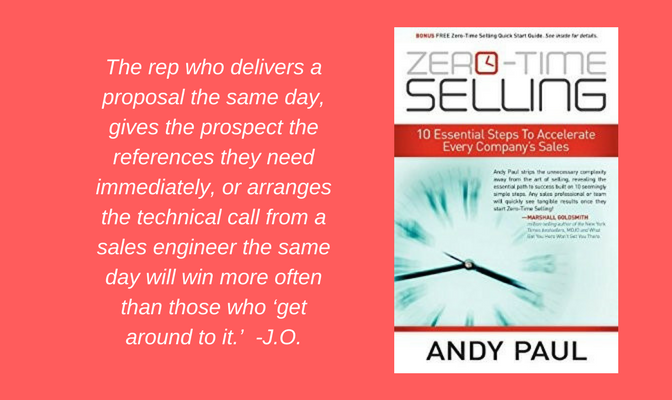 I read and reread Andy Paul’s book Zero-Time Selling, and gave it to my sales reps. We discussed the 20 chapters in sales meetings each week, with a different representative taking 2-3 chapters and highlighting what he or she had learned. We expected everyone in the sales team to chip in. In the book, Andy discussed 10 essential steps to accelerate every company’s sales.

Halfway though the book, I rode along on a phone call with one of our senior sales representatives, with Steve Simons, a new prospect. The representative opened the call well, searched out the prospect’s needs, addressed concerns/objections nicely, switched to a quick live demonstration, developed rapport, and finally came to the next step.

The prospect stepped up and asked for three things. He wanted to have a quick Q&A with a system engineer, he wanted a quote, and he wanted to know how long it would take to install and start using the product. The sales representative said that he would set up the call with the SE and get the proposal to the prospect within the next five days. The proposal, he said, would cover the install time and requirements.

I couldn’t stand it

“I couldn’t keep quiet and watch this sale slip away. Our competitor had already quoted a price, the SE was probably available, and we already knew the average install time. Where was this rep when we read the book? Did he have amnesia?”

The prospect knew I was on the phone so I stepped in.

“Paul,” I said, “let’s conference in our System Engineer, Jim, right now, if he’s available. If he isn’t handy, bring in Susan, the department manager. As for the proposal and quote, let’s you and I finish this by 4 p.m. today. In the meantime, the per-seat average cost is $4,900” (which was 10% less than the competitor’s price). “The average install time takes a few hours, and we will personally take you on a tour to answer any questions you have. Our customer service experts will help you with those questions.”

I finished by saying, “Steve, if you can hold on for another few minutes we’ll get the SE on the line.”

As it turned out, the SE wasn’t available, but the manager was and she answered Steve’s questions. We got the proposal to the prospect that afternoon, before the promised time.

In the after-action call with the sales representative I simply asked him how he thought the call went. He was miffed, didn’t hide it well, but reluctantly admitted that speed was a factor which was in his control.

Yes, we got the sale within a week and the sales representative became a believer.

“So, the question is, “Are your salespeople responding to the prospect’s request immediately or when they get around to it?”

We learned from Andy Paul that when prospects ask for information or a quote on the phone, they no longer expect to wait a week until the rep gets around to it. The rep who delivers a proposal the same day, gives the prospect the references they need immediately, or arranges the technical call from a sales engineer the same day will win more often than those who ‘get around to it.’ Prospects relegate latecomers to the ‘also-ran’ category. Buy the book Zero-Time Selling; live by its recommendations.

This is one of the 56 reasons companies fail to reach revenue forecasts and what to do about them, which appears in a recently released ebook: How to Turn Around Failing Sales available at the Sales Lead Management Association.

How to Tell if Your Sales Pipeline is Failing You

Obermayer is the founder of the Sales Lead Management Association, a four-time author, and publisher for the Funnel Media Group.