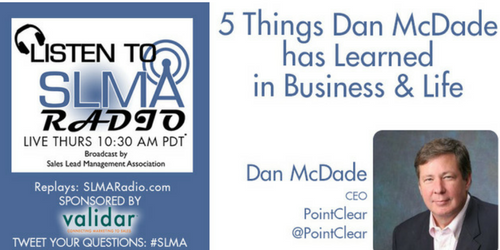 Jim Obermayer is the founder of the Sales Lead Management Association, and host of the Funnel Radio Channel. Jim recently interviewed PointClear’s Dan McDade about the five most important things he’s learned in business and life—in one of an ongoing series of radio programs featuring sales and marketing industry leaders. Following is an edited transcript, or you can listen to the program in its entirety here.

Jim Obermayer: Dan, let's hear about these five most important things that you've learned in business and life. The microphone is yours: sir.

Dan McDade: Thanks, Jim. One important lesson I’ve learned was borrowed from Stephen Covey: Seek first to understand and then be understood (which I think he learned from St. Francis). I apply this learning in business by trying not to interrupt or race to a conclusion on sales calls—even if I need to allow an uncomfortable silence to occur. As I contemplate what the prospect just said, often he or she will end up adding valuable information they may not have said otherwise. The time I spend thinking, and the opportunity that gives the person I’m talking to provide additional details, has proven to be a positive for both sides.

The second lesson I’ve learned is another one of Mr. Covey’s 7 Habits: Start with the end in mind. In my work the first question I ask marketing leaders is “what does success look like to you?” It's kind of amazing, because while my prospects acknowledge that this is a good question, frequently they don't have an answer. I think it's because marketing in general has been conditioned to have budgets cut and lead quotas increased. They're not used to getting much feedback, and they really don't know what to expect from programs. They don't look at a program and say this ought to generate X return. Or alternatively they use a formulaic approach and say if we close 10 percent and the average deal size is $50,000, then the return on marketing investment would be 10x, and we have to have at least 8x so 10x qualifies, and they approve the program. A lot of times, they don't really actually go back and see how close to that estimate they came to what actually happened. I’ve found it's critically important when you're starting with the end in mind to think about not just the immediate leads you're going to get from a program but also the longer-term outcomes, such as the health of your database and how that database will affect future growth.

(For more information, check out this blog about the four revenue sources that most ROI calculators miss.)

Maybe the most important lesson I’ve learned is: Be loyal and value those who reciprocate loyalty. I believe consistency and longevity are among the most overlooked qualities in today’s workforce. Our management team has an average 10 years’ experience with PointClear, and that longevity translates into added value for clients. They’ve seen over and over what a client may have only encountered once in a lifetime. They’ve learned a lot and are invested in the success of the sales lead management programs we deploy.

The fourth learning on my list is: You can't put in what God left out. People laugh about that one, but one of the mistakes, probably the biggest mistake that I made as a young manager (and one of the biggest mistakes that I see other managers making) is wishing that someone would magically change and be good at something they're just not good at. Maybe managers do this because they like the person or maybe they need them, but the bottom line is the best thing that you can do when you have somebody that's not a fit for the job is release them to do something that they will be good at. In doing this, you also release yourself from the feeling of responsibility. Most of your listeners probably know how it feels as soon as you let somebody go. You've worried about it for days, weeks or months, but as soon as make it happen, you feel the relief that comes with making the right business decision for all involved.

Jim Obermayer: In fact, a decision like this works both ways. Sometimes, you have to release yourself from a job that's not a good fit. And doing that is a great release also, isn't it?

Dan McDade: It absolutely is. I remember finding myself in a situation where I was with a company that had been there for five years when a third management team came in. I could tell they weren’t going to be a good personality fit or me. The funny ending to this story is I got let go, but afterwards, they asked me if I would stay for a year of transition.

Jim Obermayer: At a higher price.

Dan McDade: Yes, but I still always thought it was ironic that while they were railroading me out the door, they valued me enough to ask me to stay for a year, and I did everything I could to help them be successful, including training my replacement, who ended up lasting about six weeks, but that's another story. You're absolutely right. You can get a lot of relief from just making that tough decision to let somebody go or to cut yourself loose from a bad situation.

Jim Obermayer: What is the fifth lesson on your list, Dan?

Dan McDade: The big hand theory. Years ago, when I was transitioning from being the president of a lead generation company—one of the old-fashioned kinds with very young folks, high employee turnover, high client turnover—to starting my own company, PointClear. I decided I wanted to work only with certain kinds of people. I felt like certain characteristics would be necessary to really do this new business right, and that clients would gravitate toward us because our people had these characteristics.

If we were together in person, Jim, I’d have my hand sticking out in front of your face (obviously not too close) and I’d point to my fingers one by one and tell you PointClear hires people who have 5 qualities. They’re nice, smart, curious, hard-working and ethical. Nice makes for a great working environment. Smart inspires everyone around. Curiosity is so important, we actually test for it. Obviously, hard-working is what it takes to get the job done, and ethics encompasses fairness and doing the right thing, which is central to our culture.

Interestingly, we find candidates sometimes self-select themselves out when we explain the big hand They realize we're serious about our culture and if they don’t have what it takes, then they probably don't belong with us.

Jim Obermayer: Have you had any mentors in your life, Dan, that you’ve learned from that you'd like to mention?

Dan McDade: Thanks for asking that, Jim. Actually, I have two that stand out. When I turned 16, I went to work for a garden center. It was called Valley View Farms Country Store and Produce Market in Cockeysville, Maryland. There was a guy by the name of Billy Foard who was driving to work at 6 a.m. in an old gray station wagon who picked me up on my first day on the job—I was hitchhiking the three or four miles to work. I asked the guy—who I didn’t know then—where he was going, and he said, "Well, I'm going to Valley View Farms." I said, "That's where I'm going too!" He replied, "I know. I'm your boss, you dumbass."

He was a very, very good guy who embodied the big hand theory, and helped instill those same qualities throughout his company. He taught me a lot about life and business and was a reference for every job that I had up until the last time I was looking for a job before starting PointClear. He passed away last January.

The other mentor who unfortunately also recently passed away was a guy by the name of Tom DePrizio. He ran a company called UST. It's really where I got experience in business to business telemarketing. He's the best salesperson I've ever met. He taught me the one about not being able to put in what God left out. He had many funny, and true, expressions that were really lessons. He was kind of a short, round guy, and he always said “you can coach a lot of things, but you can't coach height.” He also said “if dogs could talk, they wouldn't be man's best friend.” He was smart, a great trainer and a great consultant. We spent a lot of time together over seven years.

Jim Obermayer: It's been eye-opening for me today, and I'm sure it will be for our listeners going forward. Dan, thanks for your time. We appreciate you coming on. I always appreciate your advice at SLMA. You've steered me away from some things I almost jumped into. These entrepreneurs follow shiny pennies, don't we? You were always very nice, saying, "Jim. I'm not quite so sure that would be a good idea." You were always very subtle, Dan McDade.

Dan McDade: Thank you. I appreciate you having me on today.