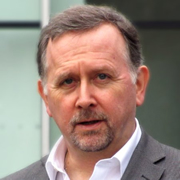 This article was originally published by Bob Apollo on his blog Accelerating Revenue Growth: the Inflexion-Point Blog.

As CEO of UK-based Inflexion-Point Strategy Partners, Bob works with the leadership teams of technology-based B2B-focused companies, enabling them to make the critical connections between their marketing messages, their sales conversations, their true differentiators, and their customer's priorities.

Alec Baldwin has got a lot to answer for. And, no, I’m not talking about his appearance in “Dr. Seuss' The Cat in the Hat”. I am, of course referring to his role as Blake, the alpha dog motivational salesman in the film “Glengarry Glen Ross”.

By the way, you can blame the IMDb website for the “alpha dog motivational salesperson” tag. It’s a laughable description. But it’s somewhat relevant, because the role he plays in that film is, by the standards of effective salesmanagership, completely barking.

For those of you unfamiliar with the movie, Blake’s philosophy of salepersonship is that, if sales people do nothing else, then they should at least Always Be Closing. ABC. That may strike you as a neat acronym—but it’s at the heart of a lot of sales problems.

A Question of Technique?

All it would take, so they hope, is better “closing technique”. A few smart questions. A touch of pressure. The alternative close. The generous offer of a puppy dog. Or even, heaven forefend, the use of a thermometer close (I suggest you Google that one).

Well, if it was that simple, sales training courses would offer money back guarantees. Which, of course they don’t, and even if they did, they probably wouldn’t be worth the paper or the electronic ink they are printed on.

The Problem Starts at the Beginning

In high-value, complex sales, the most common reason sales people struggle to close deals is that the opportunity was never real in the first place, was set up poorly, and/or hasn’t been developed or managed properly since.

Top performing sales people qualify rigorously and repeatedly throughout the sales process, because they have too much respect for their own time to chase opportunities that are never likely to close, and would prefer to get out and find a better opportunity instead.

The top performers aren’t the problem—it’s the middle-of-the-road sales people who believe that by eliminating a dodgy deal they are reducing the value of their pipeline—when of course the opposite is true. Poorly qualified deals drag down the true value of the pipeline.

But it’s not just down to the sales people. Sales managers have a key responsibility to ensure that their sales people critically and robustly qualify every opportunity, with the default being, if the deal looks questionable, get clarity as a matter of urgency or get rid.

Sales people who open a deal in the right way stand a much better chance of closing it smoothly and on time. If you invest time up front in truly understanding all the dimensions of the opportunity, it’s much more likely to move forward in a predictable fashion.

Don’t Be a Smart Alec!

Don’t be a smart Alec. If you opened the deal properly, and qualified it effectively, you wouldn’t have to work so hard at closing it. And you might not irritate your prospects quite as much.

There is, by the way, a more effective approach. You can learn some of the answers by downloading our guide to the 10 winning habits of today's top-performing B2B sales and marketing organizations.