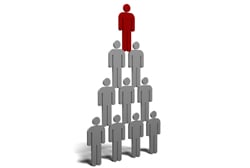 I was interested in hearing how these executives felt about this issue, so I posed the following question on the LinkedIn forum for the group, Sales/Marketing VP's & Directors - Software & Technology:

“When sales and marketing are not on the same page (market definition, criteria for leads, definition of success / metrics), who owns the fix?”

Over 50 sales and marketing executives have responded with thoughtful and passionate comments that identify who they believe should own the fix for non-alignment issues.

With this post, I’m introducing a series of three blogs that share their comments combined into the following three groups:

The largest group of respondents—42%—says the CEO is responsible for the non-alignment fix. This blog looks at their comments in more detail.

A second group—21% of respondents—says sales and marketing groups or their heads should work out the fix among themselves.

Part 3: Sales & Marketing Unaligned? One Party Owns the Fix—But Not The CEO

Following are the first set of comments offered by executives who believe the CEO should be tasked with resolving alignment issues. This group is responsible for 42% of responses, the largest single set. On the lighter side, I’ve added a song title that speaks to each set of responses.

The CEO owns the fix

“Another One Bites the Dust”—Queen

“The CEO: who either needs to reassert the objectives/strategy of the business, or get the sales/marketing heads in a room and ask which one of them doesn’t get it.”

“A problem of this significance to the future of the company is always owned by the CEO. However, they may not own the solution...or not all of it.” With examples of how sales, marketing and CFO have a stake in input and outcome, this writer added, “So, a bunch of people may need to be in the room, but the CEO is at the head of the table.”

“Whoever these two characters report to, typically the CEO, or the COO in a few cases. If the money/rev-gen side gets all fouled up, they'll soon get to report to the CFO - with all the joy and bliss that that will bring.”

“Whoever is responsible for the Culture, Language and People in the business, owns the fix. Psst... that's not the CIO. Get Aligned!”

“Neither sales nor marketing owns the problem individually. It takes only one group to mess things up, but both departments have to fix it. If the two department heads can't fix things, the CEO or COO must insist that they play well together.”

“In case of lack of alignment, the CEO should help both leaders to identify the root causes of the issue, as he's the first shepherd of the company's business vision.”

“The CEO. It's the CEO's fault for not listening to sales and listening too much to marketing. Smaller software firms are now placing the marketing VP inside the sales teams org chart and comping them on sales quotas for their MBO's. A good thing.”

“Missing from all is that the CEO, President or Business Owner must mandate that sales and marketing align around a written value proposition.”

“OMG! Where's the CEO or President during all this other than asleep at the switch? He's/She's the Ranch Owner. Marketing is supposed to be beating the bushes, rounding up the "critters" and getting them started on the cattle drive. Sales is supposed to brand them, get 'em to market and sold. The Ranch Owner is responsible for fixing a dysfunctional team.”

I couldn’t agree more with these comments. In the end, both the sales and marketing organizations will applaud C-level involvement because it will help clarify targeting, messaging and offerings.

The next blog in the series features comments from executives who believe non-alignment issues are best resolved by collaboration between sales and marketing.