True Story: Without a marketing plan, he planned to fail! 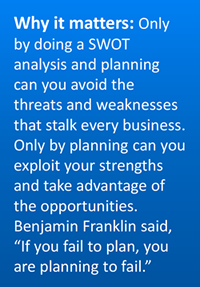 As Casey Stengel said, “If you don’t know where you’re going, you’ll end up someplace else.” For this company ‘someplace else’ had been growth, but at low margins, with chaos in the sales ranks, and a poorly installed CRM system…all because of a marketing plan that wasn’t a plan.

This is what happened.

Shelly, the president, looked at me and said, “Yes we have a marketing plan, right Don? You carry it with you, don’t you?”

Don, Shelly’s partner, jumped up and said he’d be right back, and he was gone before I could look in his direction. Shelly and I made small talk. This was my first visit to the company and she wanted my help to create a strategic direction for the company. She felt her partner Don was playing repeat, year after year, and the company was stagnating. Sales were up (marginally), but profits were suffering, their salespeople were not happy, and were leaving the company in spite of growth.

Don returned with a satisfied grin and thrust a piece of paper at me. It had coffee stains on it, was ragged and marked up, but sure enough it said ‘Marketing Plan’ right at the top. It was also dated three years before.

There was a list of bullets; things to do. Things such as:

It was a list of “stuff” to do. Worthy stuff I am sure, but stuff. “How’d this work out for you?” I asked. “Well,” he said, “this started about three years ago, and I keep adding to the stuff we want to do. Turn the page over. I have more on the back.”

It was more of the same. Rather than take him down an embarrassing path by asking questions he didn’t want to answer, I instead asked him if they had any three-to-five-year revenue or market share goals. “Nope,” he answered.

“What about objectives, strategies and tactics, and a budget for marketing?” I inquired.

“Nope, we only have 10 salespeople and a marketing manager.” With a pained expression on his face he squeaked, “Do we need something that detailed? After all, we’ve been growing at 10% a year.”

“A great many companies have a plan for marketing,” I said. “First there is an assessment of the strengths and weaknesses, opportunities and threats (SWOT). From this document companies attempt to exploit the opportunities, avoid the threats, build on their strengths, and shore up the weaknesses. Objectives are often focused on revenue targets, new
product introductions, etc. Strategies are plans to accomplish the objectives, and the tactics are the specific action items to accomplish the strategies and objectives.”

“What do you mean?” he asked, as he pushed his marketing plan toward me. “Isn’t this it?”

“A sales plan is usually submitted by the sales manager. It has the year’s sales forecast, changes in compensation programs, quotas, travel goals by rep, business objectives for the team, and key factors for success. It spells out in detail how salespeople will accomplish the revenue goals for the company.”

And he repeated, “But we’ve grown at 10% a year for six years without this stuff. Why now?”

This was why Shelly brought me into the company. Their growth, she thought, could have been better controlled and more profitable, with less sales rep turnover. Gently she said to Don, “The days of flying by the seat of our pants are over; the revenue figure has been nice but the margins are eroding year after year. There is sales turnover, we have unsatisfied customers, and I don’t know what we get from our marketing spend. We need a plan.”

Within a few weeks

They had their first tactical marketing planning meeting. The SWOT was completed in about five hours; the goals, objectives, strategies, and tactics followed in another 4-5 hours. Budgets were attached within a week. After some coaching, the sales manager created his team sales plan and the company had a new direction.

That was a year ago

Their growth was on track; in fact, a bit better. Margins were improved; sales turnover was down. Don has run the monthly sales and marketing accountability meetings and admits that for the first time in seven years he feels in control.

My point is this: if you haven’t done a SWOT analysis in a few years, do one. It is very enlightening for everyone. If your sales manager doesn’t have a yearly sales plan, do one. If Marketing is just stumbling along from what they did last year to something similar this year, it’s time create a future path by creating goals, objectives, strategies, and tactics.

I contend that there are two reasons why people don’t do things: they don’t know how, and/or they don’t want to. If you don’t know how to create sales marketing plans, that is an excuse. I can send you an outline, or just go on the web. In sixty minutes you’ll be up to speed.

If you don’t want to do a sales and marketing plan, freshen up your résumé.